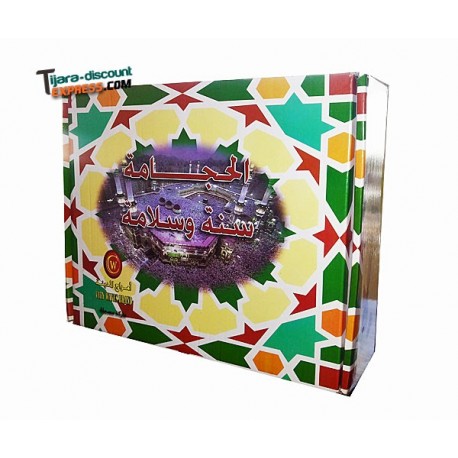 Box Set of 18 plastics suction cups with one hand pump

Hijama is a very old therapeutic technique, it has been described on papyrus dating from -1500 AC including the famous Ebers papyrus (Curtis, 2005).

But its particularity is also the fact that it is an integral part of the prophetic benefits.

We can quote here the words of Imam Ibn Qayim:

"His medicine is not like the medicine practiced by doctors.

Indeed, the medicine of the prophet (prayers and greetings of Allah on him) is a certain medicine, divine, resulting from the revelation, fruit of the prophecy and a perfect reason.

While the medicine of others (than him) is only presumption, supposition and experimentation ".

"It is obligatory for the Muslim that he does not doubt about the word of the prophet (prayers and greetings from Allah on him) and he does not need confirmation by recent discoveries".

Then there are many prophetic stories dealing with hijama and which come to legitimize and encourage its use.

It is reported from Anas (may Allah be pleased with him) that the prophet (prayers and greetings from Allah be upon him) said:

"The best thing you treat yourself with is the hijama and the costus."

"This hadith shows that the use of hijama is legislated and also the encouragement to treat oneself by it, more particularly, when one feels a need in it."

It is also reported from Ibn Abbas (may Allah be pleased with him) that the Prophet (prayers and greetings of Allah be upon him) said:

"On the night of the night journey, no group of angels approached me without all of them telling me: it is incumbent upon you, Muhammed, to wear hijama"

and in a version of Anas (may Allah be pleased with him):

"Order your community to practice hijama".

"This hadith is one of the grandest proofs that hijama is a divine remedy. To date, it contains benefits that are still elusive to medical specialists. ” See his book "Iblagh al fahama bi fawaidil hijama".

Nowadays, hijama or cupping therapy is the subject of numerous international clinical studies aimed at objectifying its therapeutic potential.

The results are convincing.

For example, here is a study concerning the indication of hijama in the treatment of headache or headache (it is, however, necessary to establish the cause of these headache because they are very numerous: neuralgia, migraine, Horton's disease , brain tumor but also high blood pressure, sinusitis, visual disturbance, stress…).

We are interested here in a study, carried out in Iran, studying the interest of hijama in migraines and tension headaches (related to stress): "The efficacity of wet-cupping in the treatment of tension and migraine headache" from A Ahmadi et al, published in 2008 in the journal "The American Journal of Chinese Medicine" Vol.36, n ° 1, p37-44.

Thus, 70 patients with chronic migraine or tension type headache benefited from a wet hijama on 3 occasions: D1, D14 and D28.

Then, these patients were followed for 3 months by evaluating the intensity of the pain using a visual scale as well as the duration of the pain episodes.

It is therefore understandable to see the enthusiasm aroused by this therapy throughout the world, both among health professionals and ordinary people and more particularly within the Muslim community.

Reviving the hijama is therefore an honorable project, but this is a responsibility that not everyone can take on.

Indeed, the hijama practitioner needs to be trained in the fundamental principles of medicine such as physiology, pathophysiology and anatomy.

On the other hand, the practitioner wishing to practice hijama must master the technique of blood extraction but also the rules of asepsis related to the manipulation of blood.

In this sense, it appears that health professionals have greater legitimacy in the practice of hijama.

Finally, I recall this hadith of ru amru bnu chu’ayb (may Allah be pleased with him) which reports that the prophet (prayers and greetings of Allah be upon him) said:

Compositions
Set of 18 plastics suction cups with one hand pump